Doctor of Dental Surgery, Oral and Maxillofacial Surgery. One of the best oral an maxillofacial specialists Sharjah and UAE.

Dr. Firas M. Kher Osman, is an acclaimed veteran practitioner of Oral and Maxillofacial Surgery (OMFS). He is known as one of Syria’s top doctors, and continues to grow his reputation as one of the best Oral and Maxillofacial Surgery experts in the Middle East.
OMFS surgeons like Dr. Osman have a unique dual qualification in dentistry and medicine, which allows them to handle the medical conditions that affect the neck and head. This includes the salivary gland, facial disproportions, impacted teeth, tumors and cysts of the jaws, temporomandibular joint disorders, facial pain, and more unusual conditions affecting the oral mucosa or the mucous membrane.
In over two decades of practice, Dr. Firas Osman had successfully treated patients with surgical procedures suffering from unusual medical abnormalities, such as impacted teeth, facial pain, misaligned jaws, facial injuries, oral cancer, cysts, and tumors, as well as patients in need of dental implants and facial cosmetic surgery. Dr. Osman guarantees minimal pain dental treatment for his patient in all the procedures in specializations that he performs. 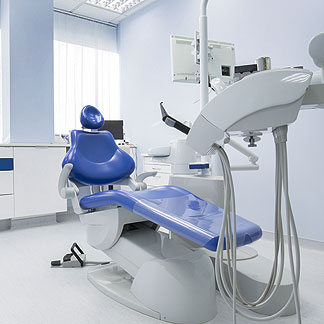 Dr. Firas M. Kher Osman earned his Medical Dental Degree in Stomatology from the Moscow Medical Stomatological Institute, Russia and finished his Masters in Oral and Maxillofacial Medicine at Damascus University, Syria with honors in 1995. 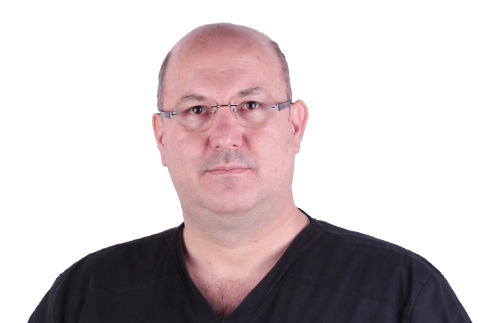 We believe that everyone can have a healthy smile for life and with our help it’s easier than you think! We are passionate about helping patients to live better quality lives thanks to good oral health. 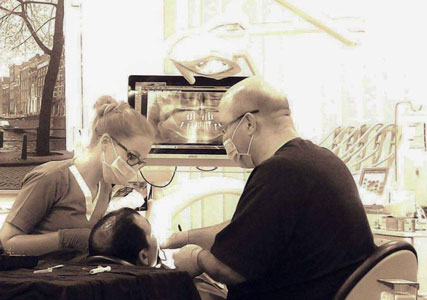 Born on Jan 25, 1970, Firas Osman was raised in the historical city of Homs, one of the most beautiful cities in Syria. He was a consistent honor student during his elementary and high school years at the Brotherhood Private School, graduating with distinction in 1987.

The young Firas set his sights on pursuing higher education in the field of Bio-Science and enrolled in General Bio-Science Faculty in Pharmacy, Galagigistki Institute, Damascus, Syria. His exceptional grades opened doors to study in Russia (formerly the USSR). In 1988, he attended the Ivan Franko National University of Lviv in Ukraine for preparatory language studies before transferring to the Moscow Medical Stomatological Institute (MMSI) in 1990.

Dr. Firas returned to his hometown, Homs, where he acquired credits in International Specialization in Oral Maxillofacial Surgery (OMFS) from the Syrian Ministry of Health. He was ranked with honor and distinction when he completed his postgraduate studies with Oral and Maxillofacial (OMFS) residency specializing in Stomatology in Damascus, Syria.

He got his license to practice (DDS, MD) on November 6, 1995 in Russia, and (OMFS) on December 15, 1999 from Syria’s Ministry of Health. This started many distinguished years of practice in Syria’s major hospitals and clinics.

In 2012, Dr. Firas M. Kher Osman opened a private practice in Damascus, the Modern Dental Clinic, while attending to the patients in the Al Shami Private Hospital (Suergenat) Almalkim

In 2013, he moved to the United Arab Emirates and established (DSMC) AL DANA Specialists Medical Center in Sharjah while being listed in Sharjah Corniche Hospital. DSMC has been one of the best dental centers in Sharjah and UAE.

In 2013, he moved to the United Arab Emirates and established the AL DANA Medical Center in Sharjah while being listed in Al Corniche Sharjah Hospital. He secured his license to practice Oral And Maxillofacial Surgery (OMFS) from the Ministry of Health in Sharjah, UAE on May 22, 2013. 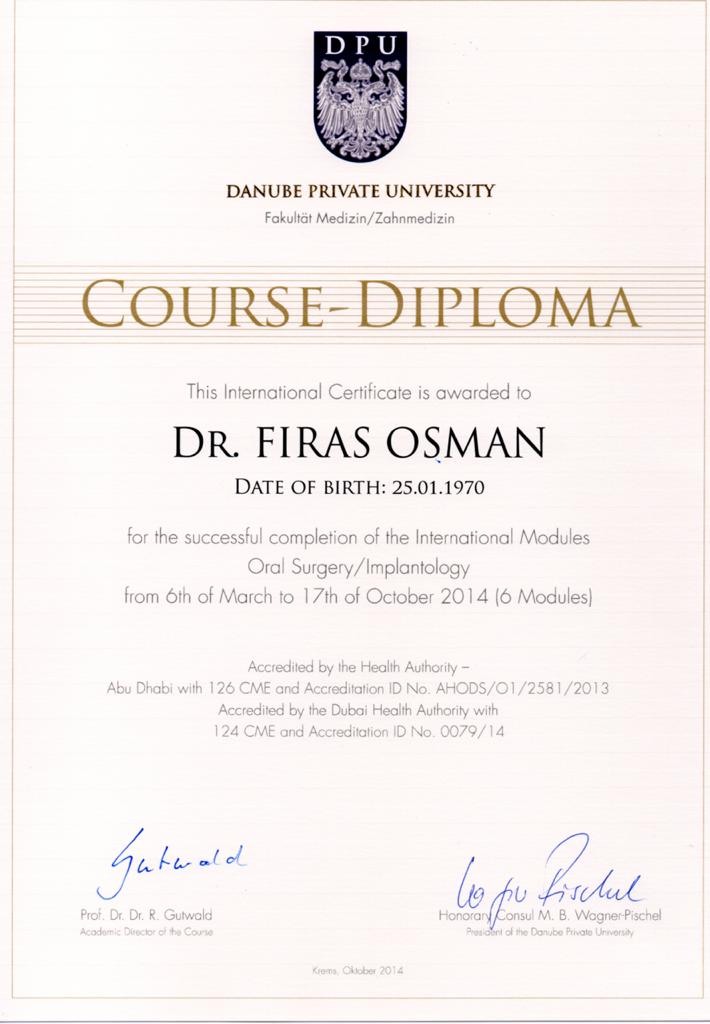 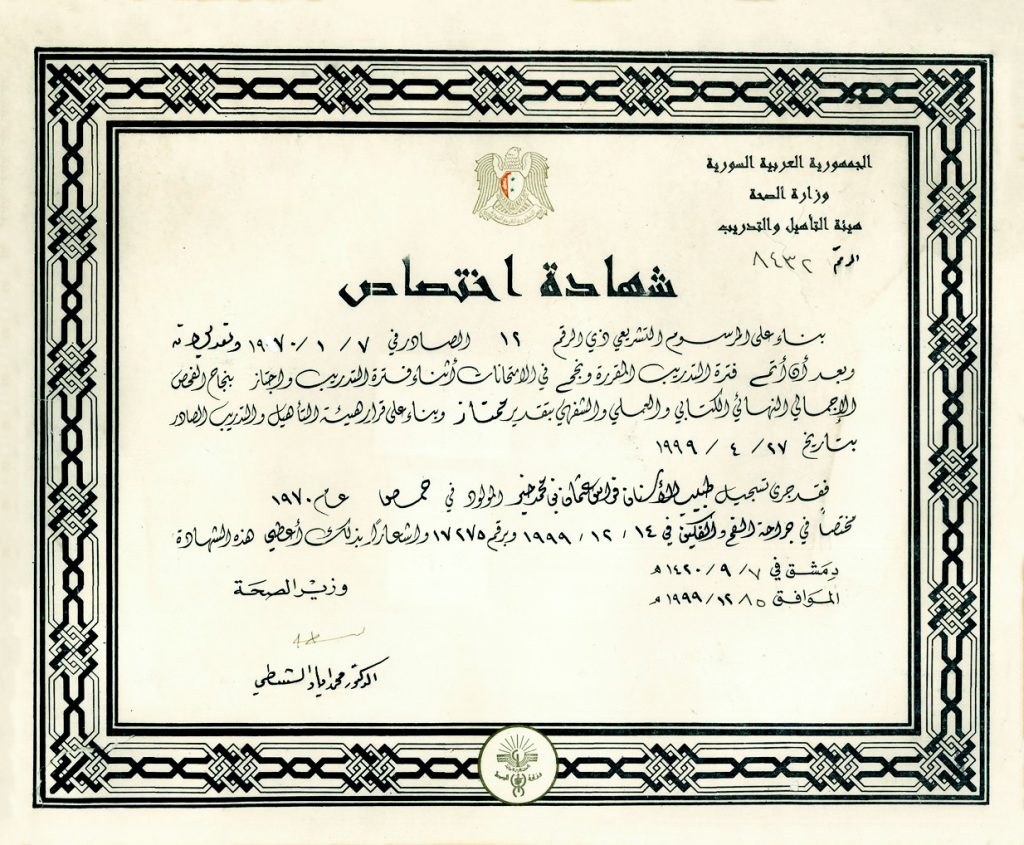 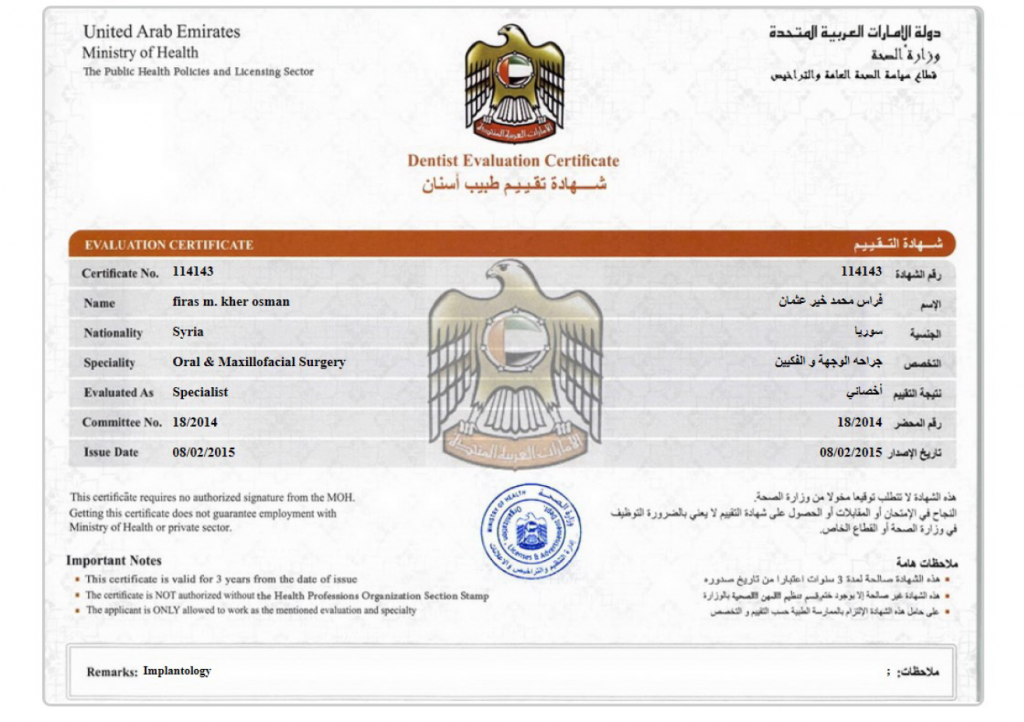 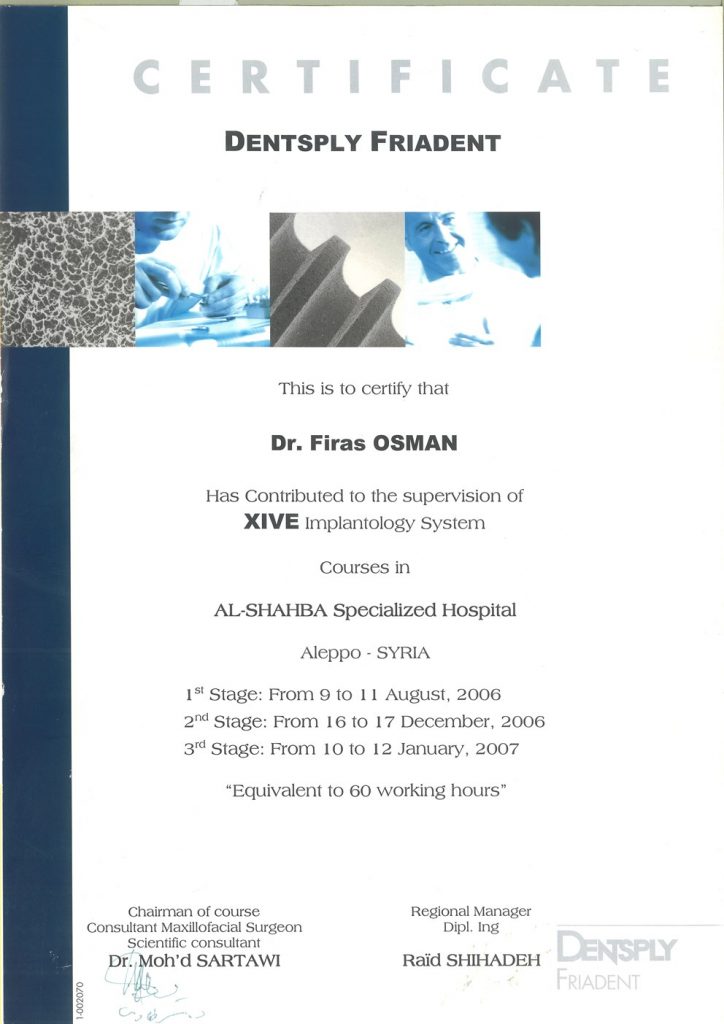 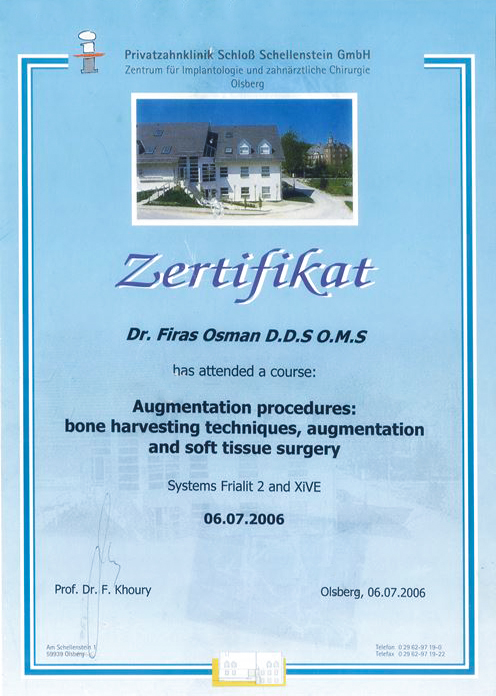 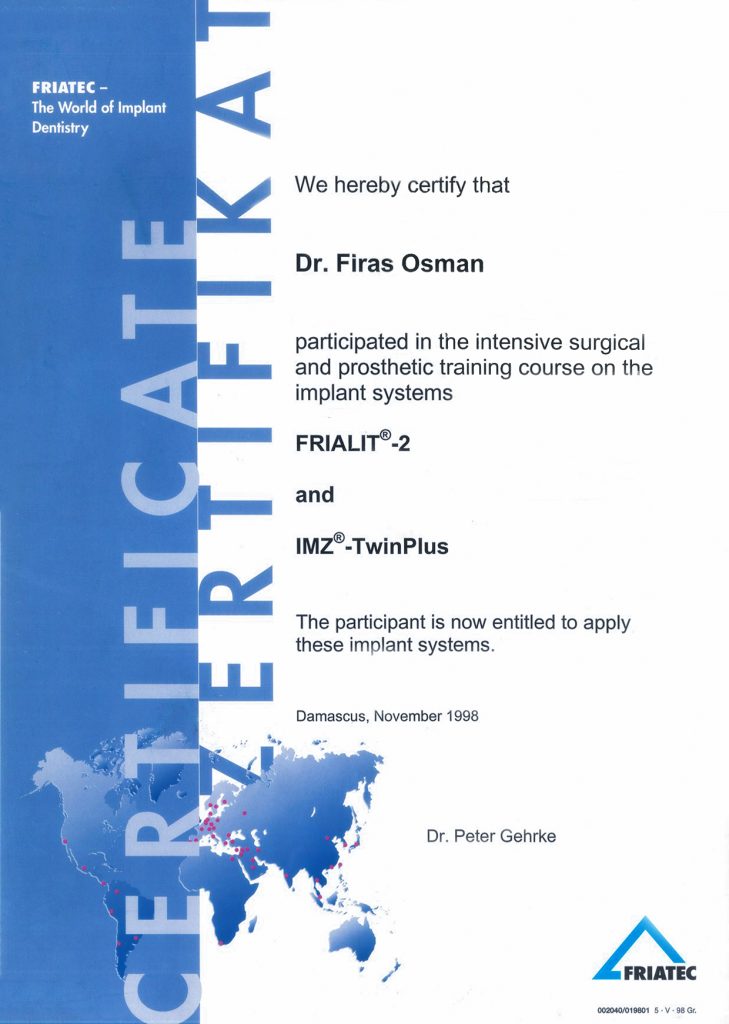 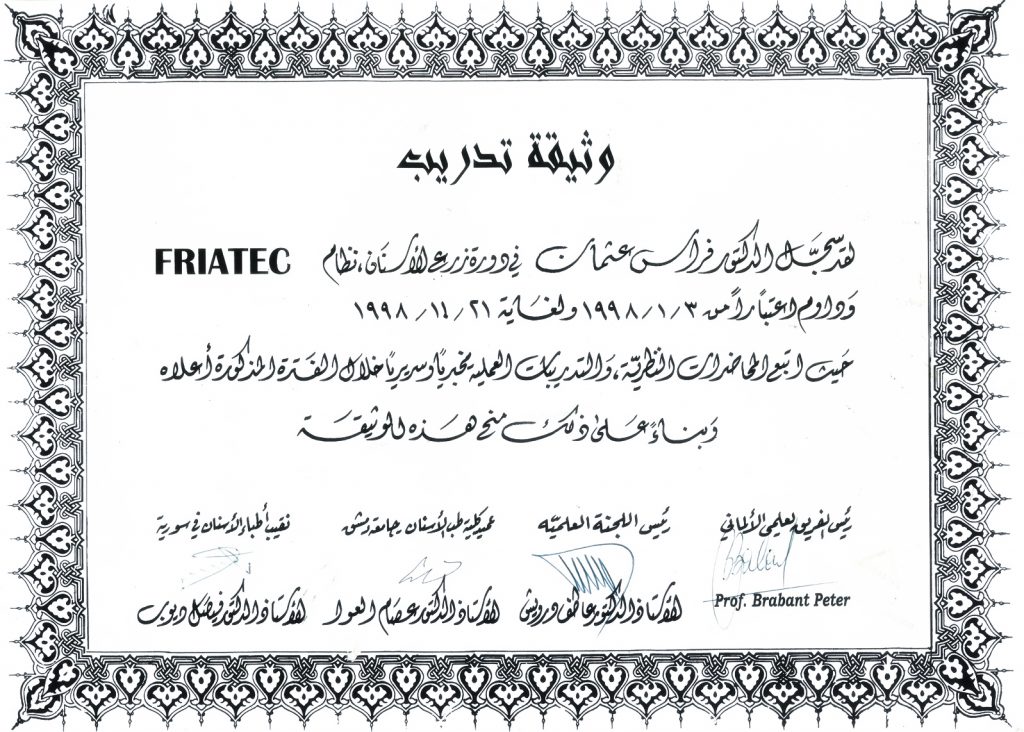 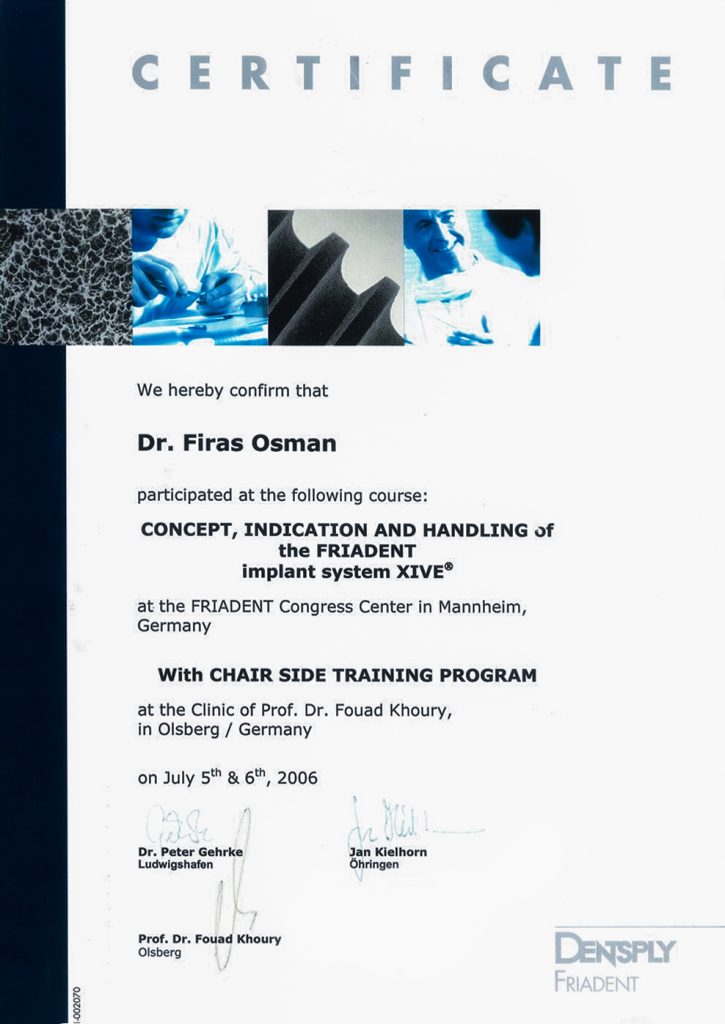